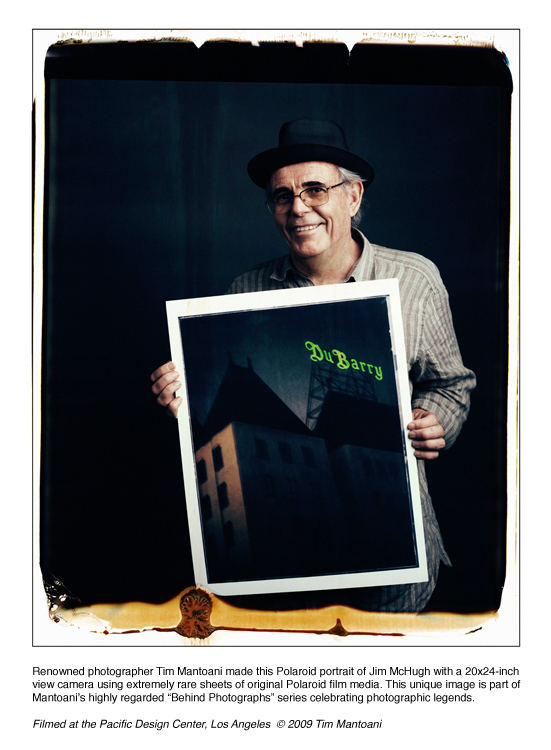 Jim McHugh has garnered many awards for his photography and is included in prominent collections such as The Museum of Modern Art, The Walker Center, The Polaroid Collection, and the National Portrait Gallery in London. He has exhibited widely both nationally and internationally.

In 2010, the United Nations honoured him with the IPC Professional Photography Leadership Award. Jim also won The International Photography Awards’ First Prize for Fine Art Photography 2007, and George Eastman House awarded him Best of Show in 2008 for architectural imagery of Los Angeles.

He is renowned for his large format Polaroid images of Los Angeles, urban landscapes monumentalizing that which is now invisible and derelict. These pictures were first exhibited at Timothy Yarger Fine Art in 2010 in a show of Jim’s work titled “Let’s Get Lost: Polaroids From The Coast.”

Jim is critically acclaimed for his series of artist portraits that include Ed Ruscha, John Baldessari, and David Hockney, and he has published several books on artists. His artist portraits were first exhibited at The James Corcoran Gallery in Los Angeles in 1984. In 2011, the Yarger gallery presented “Los Angeles: 40 Artists - Photographs by Jim McHugh” in partnership with the Getty Museum’s “Pacific Standard Time” program, celebrating art in Los Angeles from 1945 to 1985.

Presently, Jim is working, based in Los Angeles, and is preparing an exhibition for Photokina - World of Imaging 2012 in Cologne, Germany.